3…2…1…And so begins my review of Apollo 18, Spanish-born director Gonzalo Lopez-Gallego’s first full-length foray into American cinema. The classified tapes were released earlier this year to show the classified footage of Apollo 18, the secret mission that the government told no one about…and for good reason.

Apollo 17 was the last American lunar mission to land on the Moon…or was it? In this sci-fi mystery thriller, this conspiracy is helped along by formerly unseen footage of the mission and its devastating outcome. Three American men set out in a secret lunar mission not long after Apollo 17’s return to Earth in 1970. What they don’t realize is that USSR cosmonauts devised a secret mission of their own, and landed on the Moon’s southern pole. When Americans Captain Benjamin Anderson (Warren Christie) and Lieutenant Colonel John Grey (Ryan Robbins) find the Soviet module, a slew of events begin to happen, including power failures, non-human footprints, and finally a mysterious gash in Lt. Col. Grey’s abdomen, leading him to insanity and convincing Col. Anderson to leave without him…or attempt to. 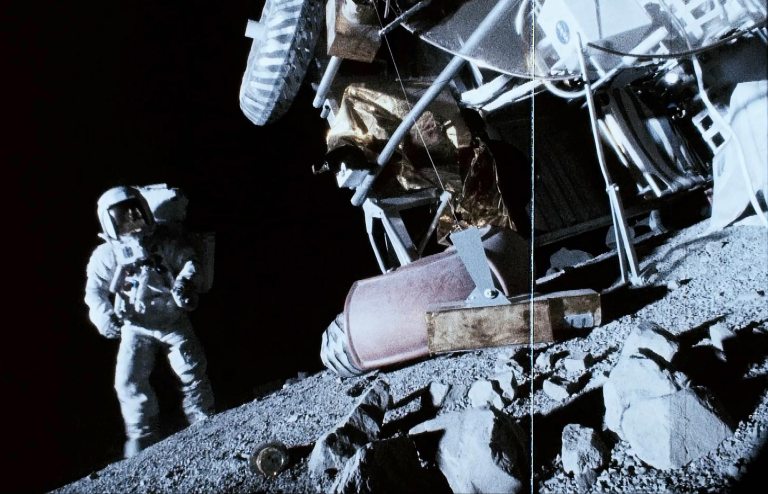 Apollo 18’s style is much like that of the Paranormal Activity trilogy, a slow, realistic approach that can sometimes get boring. Where PA relies heavily on stationary home cameras, A18’s cinematography is handheld, making it at times bumpy and dizzying. It’s also choppy and ill-edited most of the time—making the film realistic, but with no one likely believing the conspiracy anyway, I think they would have had greater cinematic success sticking with the basics and not making its viewers nauseous. With such a realistic style, background noise is far too prevalent. Almost the entire time, there are noises that obstruct the ability to hear dialogue, and eventually it gets too annoying to bear, losing its bearability (n. the ability to tolerate something…apparently still not a real word).

While acting isn’t in the forefront of my review, the performances from the two main (and virtually only) characters by no means hinder the film’s success. Christie and Robbins act well for relative unknowns (Christie has been in many TV movies and a few episodes of NBC’s sitcom “Happy Town,” Robbins is probably known best for his roles in Passengers or Catwoman).

With a mostly realistic script, filled with space jargon that nobody likes to hear, the believability of the plot is helped by the lines given to the characters.  I give credit to the writers, Brian Miller and Cory Goodman (Priest), who either have strong ties to NASA or spent many months doing research. Apollo 18, as you can imagine, has its share of mistakes you can see here, but none of its mistakes ruin the movie, unless you happen to dabble in astronomy.

A slow start eventually gets more thrilling, and the movie’s final scenes are actually very suspenseful, not to mention exciting to watch. I won’t give you the “edge of your seat” line, but I was verbalizing my concerns at the characters on the TV.

Apollo 18, no longer a secret, is a decent attempt at a space thriller. It’s not the best attempt by any means, but it will have its fans. Would I rent it if I were you? If you can afford to, I would suggest trying it. I mean, it’s not awful.