“Nobody tells me what to do,” says Johnny, the quintessential—and when I say that, I mean inexcusably stereotypical—motorcycle-riding, leather jacket-wearing, quiet, misunderstood rebel. Directed by Laslo Benedek (Death of a Salesman), The Wild One is “a shocking story” that doesn’t really throw out any surprises…except perhaps that Marlon Brando thought this would be a good career step to follow A Streetcar Named Desire.

Johnny (Brando) and his gang of crazy, wild, unruly biker dudes ride into a town full of old people who JUST DON’T UNDERSTAND! You know how it goes. A rival group also enters town, and Johnny begins to fall for Kathie (Mary Murphy), the Sheriff’s daughter, which of course causes issues of its own. But then their “relationship” takes a few turns. In the end, what will their relationship become? Will his gang be prosecuted or—worse yet—killed by the small-town authorities? 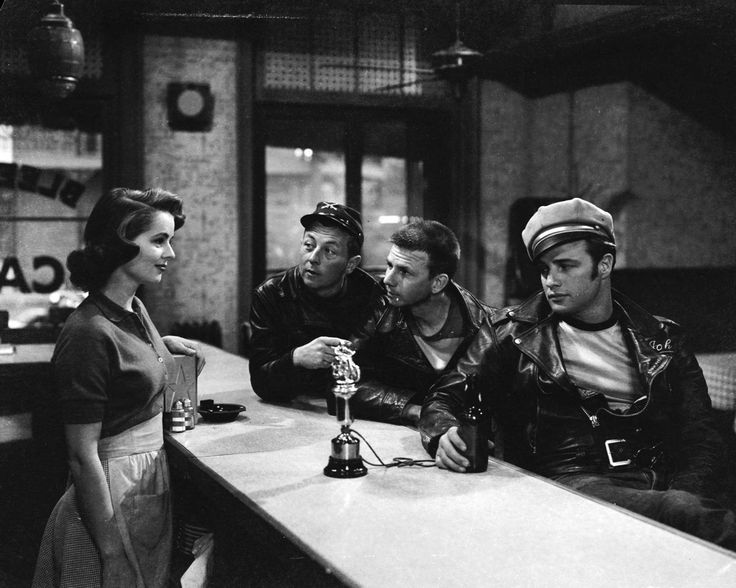 It is 1953, but the lighting and sound could use some work. The music sounded more like The Wizard of Oz than the rock ‘n’ roll you may expect from a rebellious ’50s film. No Elvis, no Chuck Berry, just weird orchestral compositions. The lighting was dark, but not quite noir. The sets looked phony, and some of the motorcycle scenes were comical due to their also Oz-esque painted backdrops that represented the vast countryside behind them as they drove. It would have been better just to leave them out. I remember reading that Steven Spielberg knew the shark in Jaws wasn’t entirely realistic, so he kept it underwater as much as possible. If you don’t have anything nice to show, don’t show anything at all.

The acting was melodramatic and forced. Murphy went between crying and shouting, and played the damsel in distress way too predictably. At one point, she stood up for herself to the rebel…and then broke down and cried, apparently due to the director’s and writers’ fears that she was being too strong and they were being too feminist. Brando, as well as most of the townspeople, play their parts just as typically. Brando is quiet, rebellious (about as rebellious as Pee-Wee in his Big Adventure) and too independent for “chicks” that don’t fall all over him. The townspeople are grumpy old coots, trying to convince their nonchalant, kind sheriff to do something about the gang.

Don’t fall for Brando’s charm; this movie is not worth the price to rent it. It is interesting to see Brando before The Godfather and Apocalypse Now, but beyond that, The Wild One is just a weak rebel flick.