From director Ruben Fleischer (30 Minutes or Less) and screenwriters Rhett Reese and Paul Wernick (both working on the 2012 G.I. Joe sequel), Zombieland was a successful step into the future of zombie cinema. The comedy followed the popular Dawn of the Dead, Land of the Dead, 28 Days Later, and Shaun of the Dead.

“Cardio.” That’s rule number one in Zombieland, the world as Columbus (Jesse Eisenberg) and Tallahassee (Woody Harrelson) know it. They team together to survive in the dawn of the living, walking dead (I tried using all the popular zombie movie words). Then they meet sisters Wichita (Emma Stone) and Little Rock (Abigail Breslin), who are also just trying to survive. When they get played by the girls, they take the motto “If you can’t beat ‘em, join ‘em” to heart. But can they survive the new world of zombies, or will their fun times get the best of them? 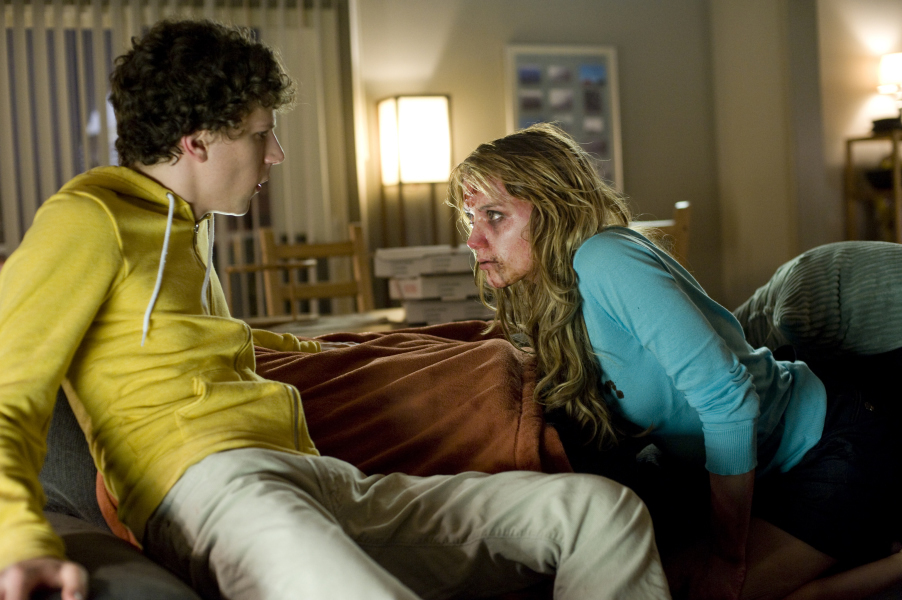 Woody Harrelson is fantastic playing…well basically himself in the role, as he often does. He is tough and rough and rowdy and he likes Twinkies. Eisenberg is also much like his other roles, cautious, gutless, nervous, and nerdy. Stone is great; Breslin is her bratty, cute, childish self.

The zombies look interesting, not Walking Dead or Dawn of the Dead great, but good enough for a comedy. Some of them look better than others; definitely watch out for the clown.

The jokes are funny, the actors are spot-on, and the make-up is good enough for this apocalyptic comedy. Sorry the review is short, I’m tired and I didn’t take notes, but I promise to at least give a short review of each movie I see. So, in the end, I recommend Zombieland, it’s an average comedy but will make most people laugh a few times. I saw it on FX, so if you flip by it, take a look…and try to survive.

7 thoughts on “‘Zombieland’ perfects the zom-com”