“I don’t wanna be just theoretically gay. I wanna do something about it.” As Christopher Plummer utters these lines, I begin to see that a film featuring gay characters does not have to be dramatic or filled with sadness, as Milk and Philadelphia are. Neither does it have to feature the more…erotic…side of relationships, as Brokeback Mountain is rumored to do (I’ve yet to see it). Beginners, based on the real events of its writer/director Mike Mills, does not submit to these standards. With dry wit, blossoming, fun romances, and a talking dog, Beginners breaks away from the pack and creates one wholly unique film.

The life of Oliver Fields (Ewan McGregor) is drastically changed when his father, 75-year-old Hal (Plummer) reveals to him that he has cancer and that he has been gay his whole life. With his father, in essence, learning how to be gay (his son must explain to him what “house music” is, after he goes to a night club), Oliver is experiencing a relationship change of his own after meeting Anna (Mélanie Laurent) at a costume party. Both “beginners” try their hardest to make their new relationships work, but no relationship ever goes smoothly. The story weaves back and forth between three periods of time: A time when Oliver is young, and his mother is still alive and married to his father; the time leading up to his father’s death from cancer; and a time years later when Oliver’s own romance is blooming. 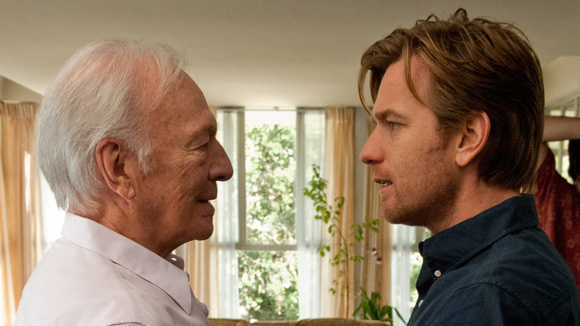 When I first heard about this movie, I also heard that it would feature a talking dog. Having been submitted to watching Snow Buddies, Space Buddies, and the other terrible Air Bud spin-offs, I had understandable doubt. “How in the world,” I thought, “can anyone make a respectable movie that stars a talking dog?” Well, director Mike Mills did it. Cosmo, the utterly adorable Jack Russell Terrier who plays Arthur in the film (and another, 2009’s Hotel for Dogs), steals the show, and by never leaving McGregor’s side becomes a main character. A story run by the Los Angeles Times tells that McGregor got so attached to Cosmo, he bought his own poodle as a sort of replacement. And don’t worry about the talking. Sans voice dubbing or animatronics, Arthur makes witty, intelligent comments with nothing fancier than subtitles, as seen below. 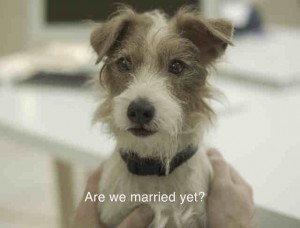 After seeing the incredible Tolstoy biopic The Last Station, I absolutely fell in love with Christopher Plummer (as well as Helen Mirren, but that’s for a different time). His extraordinary blend of wit and drama make him an actor who’s truly in a class of his own (the cheese is thick in this statement, but words have never been truer). He is fun, carefree, and makes the audience feel the same way, but in an instant, can also captivate audiences with his dramatic presence and intensity. Having a grand time with his boyfriend, Andy (Goran Visnjic), Hal can be light and free, expressing his long-held-back homosexuality–but soon, as his cancer begins to win its battle, Hal is reflective and emotional. Throughout it all, Plummer is perfect.

In the same fashion, the believable chemistry between Ewan McGregor and Mélanie Laurent is realistic, making the viewer seem to know what their characters are going through. McGregor, who can play Obi-Wan Kenobi with relative ease, can also lose the camp and become a person. In Hollywood, as I’m sure you’ve seen, playing a real person is difficult—though playing a human being is simple enough. Laurent is beautiful as the French actress Ann, and her eccentric spirit brightens the mood of the film. 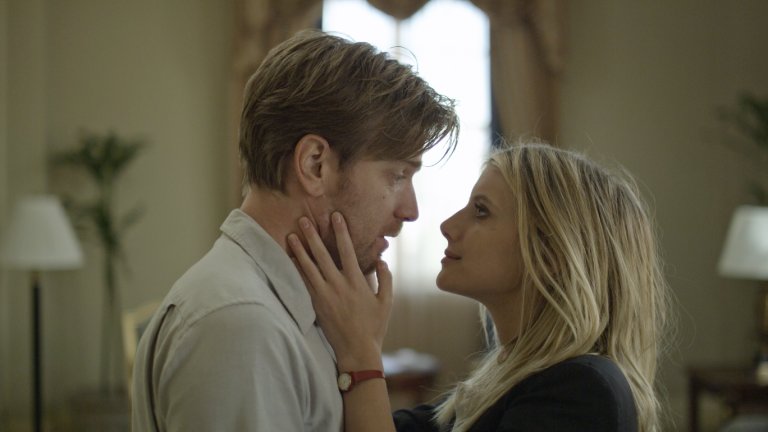 Following a triple plotline is sometimes difficult. And I will admit, in Beginners that is never more apparent. While the earliest, most distinct plotline is simple to distinguish, at times the more recent two get intertwined. Indeed, the more complex the plotlines the more respectable a movie seems to be, but with three similar eras, they sometimes begin to merge. A fan of narration in general, I was pleasantly surprised to see that Mills decided to have McGregor narrate some of the aspects of Oliver’s life, lightening the dialogue and giving the audience a peek into his thoughts. The narration style and camera shots were both unique, and contribute greatly to the movie’s break from convention.

“Write what you know,” I hear nearly every Tuesday and Thursday in media class, as we are currently writing a screenplay. “It takes balls to say what you didn’t say when you wanted to say it.” I just heard that one yesterday. Writer/director Mike Mills touched on both, writing a gutsy script about his own experiences with his father. Beginners is a touching, unique story that–to my knowledge–has never been told, is based loosely on true events, and features many elements that Hollywood rarely utilizes.

12 thoughts on “‘Beginners’ gets right to the heart of love”