Buy Toy Story 3, and let nostalgia ensue. From Pixar comes arguably the greatest animated film of all time, grossing over $1 billion dollars worldwide. For someone who grew up with Woody, Buzz, and the gang, TS3 brought joyous laughter, tension, and heartbreak. In the end, Pixar didn’t let us down, and they didn’t give us the cheesy ending many might have predicted.

Woody (Tom Hanks), Jessie (Joan Cusack), Buzz (Tim Allen), and the gang are at the end of their wits. They have retired to the notion that Andy (John Morris), who leaves for college in mere days, will never play with them again, and they are soon to make the dreaded move to the attic. But an unfortunate turn of events leads them to Sunnyside Daycare, a bright and cheery place that serves as a nursing home for old and abused toys. What begins as a cheery new adventure turns into a Shawshank prison break as a tyrannic teddy begins his reign of torture over the residents of the play place. It’s up to Woody to lead the desperate escape from the clutches of the tyrant and return home in time to see Andy off to college.

Director Lee Unkrich (Finding Nemo) was able to retrieve a majority of the actors from the previous two movies to round out this epic trilogy in grand fashion. Hanks, Allen, and Cusack all return at the top of their game, providing extreme chemistry despite recording their voices in different rooms much of the time. Unkrich also got voice actors like Whoopi Goldberg, Michael Keaton, and Bonnie Hunt to voice fun, new characters. Hunt, Jeff Garlin, Timothy Dalton, and Kristen Schaal voice the hilarious Dollie, Buttercup, Mr. Pricklepants, and Trixie, the toys of the adorable Bonnie, voiced by the young Emily Hahn. Bonnie is adorable, both in appearance and demeanor. All do a wonderful job owning their characters, and Unkrich did a great job finding an array of voices that fit perfectly in the script. 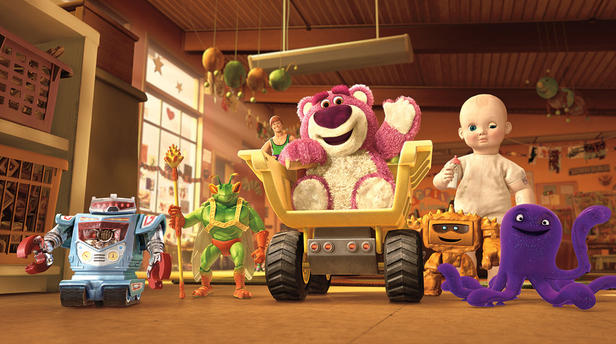 But have no fear, the end will leave you smiling without knowing exactly why, as the toys find a home better than the attic, the junkyard, or the daycare, when Bonnie takes them as her own in a heartwarming scene of selflessness by Andy. I couldn’t help but hope for Toy Story 4, which I am assured would be the greatest of them all, assuming the actors and actresses will return again, Bonnie will be as cute, and all the toys will stay together. Andy’s toys, integrated with Bonnie’s toys, would make a magical film of laughter, fun, and joyous nostalgia. I will say, however, that if they decide to end with the trilogy, the ending provided a tremendous amount of closure and happiness, and anyone should be happy to see the series end in the way it did. To quote one of Woody’s last lines, uttered as the gang watched Andy drive down the tree-lined street, away from the house and toward his college…”So long, partner.” I couldn’t sum it up better.

As many animated films are doing recently, TS3 does a great job of mixing adult humor with the child humor. Adult humor makes his way into the film at just the right times, but some childish lines (“He ain’t the sharpest knife in the….place where they keep the knives”) got some uproarious laughter from me as well, if I’m being honest.

Knowing from experience, even if you’ve seen it several times before, TS3 invokes the same feelings every subsequent time you get to see it. “People 4 another Toy Story!”