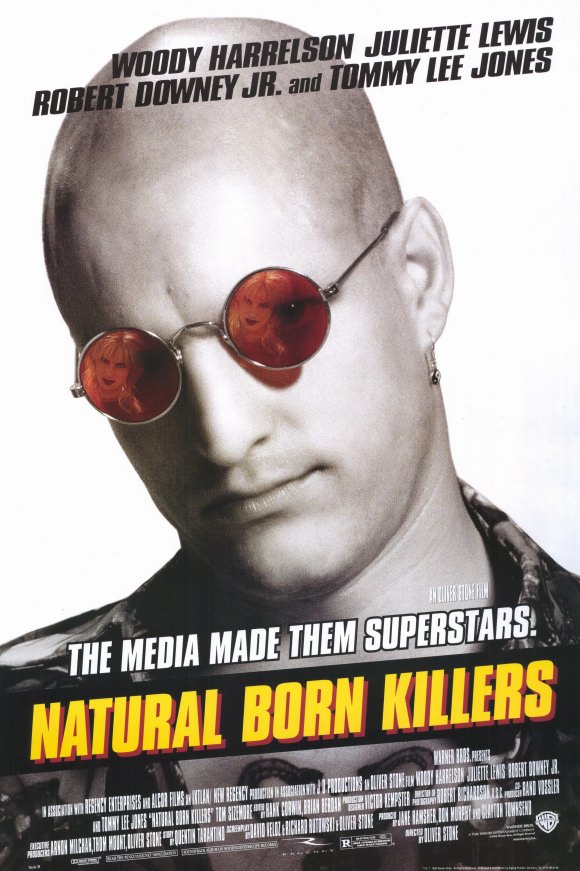 Like Woody Harrelson’s character Mickey Knox, I also sometimes wonder why Hollywood keeps “makin’ all these stupid fuckin’ movies”…including 1994’s Natural Born Killers. The film stars Harrelson, Juliette Lewis, and Robert Downey Jr., is directed by Oliver Stone (Wall Street, Platoon), and written by the master of all things violent and irrelevant, Quentin Tarantino. To say the least, NBK is probably an acquired taste, like the key lime pie in the film’s opening scenes.

As far as plot goes, the story was written by Quentin Tarantino…so there really isn’t one. Two killers, and lovers, Mickey (Harrelson, Transsiberian) and Mallory (Lewis, From Dusk Till Dawn) Knox, are killers. They have killed 52 people in 3 weeks…quite a feat, especially considering they always leave one bystander alive to tell the tale. Eventually, however, they meet their match, when a detective, Jack Scagnetti (Tom Sizemore, Saving Private Ryan) threatens to harm Mallory. “Love kills the demon”…or something like that. They go to jail (where the warden is Tommy Lee Jones) but you know these crazy mother-killers (no really, Mallory shot her own mom) won’t be contained by steel bars…or will they?

I’ll break this movie into two distinct parts: jail and pre-jail. Before the killers are apprehended (which takes place almost exactly half-way through the film), the movie was filled with blood, violence, sex, and weird fake sitcom clips. Also, whenever the couple drives, or whenever they are indoors with a window or door open, the landscape outside is indescribably weird and unnecessary. Mallory pops a squat in an open field, while holding a conversation with her boyfriend. Media clips show the love the pair receives from fans, calling them “way cooler” than Charlie Manson (I don’t know about that).

While in jail, the couple doesn’t see the world through windows, or doors, nor do they drive, nor do they piss in fields, so the movie takes a tremendous swing toward bearability (n. The ability to bear, or tolerate, something. Apparently is not a real word). Robert Downey Jr.’s character, investigative reporter Wayne Gale, gets much more screen time, and subsequently, more time to show off his Australian accent. To be honest, Harrelson and Lewis are perfect fits for psychotic mass-murderers. They exude an aura of creepiness, and really seem like they love killing. It’s inspiring (hopefully not as inspiring as Taxi Driver was to John Hinckley Jr.). Therefore, the 5/10 I gave the movie was a combination of the 6.5 I would have given the second half and the 3.5 I would have given the first.

After W., which was unimpressive, this is only the second movie of Stone’s I have seen. I never really liked Juliette Lewis (though I love What’s Eating Gilbert Grape and Whip It) and I try to avoid Tarantino movies like HIV (in my defense, I didn’t know he wrote the story until after the movie started). Despite these facts, the movie wasn’t terrible. But would I watch it again? Nope.