I wrote this critical analysis for a college English course I took in college, where I compared Sherlock Holmes movies from Basil Rathbone to Robert Downey, Jr., and connected their stories to the eras in which the movies were produced. I read dozens of plot synopses and probably more than a hundred movie reviews, written by IMDb users and professionals like Roger Ebert, and used their words to describe the movie. Then I looked at notable events from the eras the films released in and connected the two. Enjoy!

The Transformation of “The Original Caped Crusader”

His deductions might be “elementary,” but his constant transformation of character is certainly not. Sherlock Holmes has long been the master of mystery in film. However, this dynamic character has sometimes undergone dramatic changes from movie to movie. In most cases, this has little to do with the actor playing the role, and much to do with the culture of Hollywood at the time of the film’s release. A socio-cultural analysis such as this assumes that everything in the characterization of Sherlock Holmes is there for a reason (Dickerson 11). In this way, Holmes in part does not play the character British author Sir Arthur Conan Doyle—writer of the famed book series—intended him to. In some cases, Holmes is not even playing himself; he is portraying American culture (and sometimes even British culture) as a whole.

In the year 1922, John Barrymore starred as the famous sleuth in one of the premiere Holmes movies, the silent Sherlock Holmes. In the years leading up to its release, America was going through a revolutionary time, with the first commercial radio broadcast, the passing of the 18th Constitutional Amendment prohibiting the sale or purchase of alcohol and the 19th Amendment granting women suffrage in 1920, and the end of the bloodiest war in American history to that point, World War I in 1919 (Rosenberg). Americans seemed to be on top of the world, with ecstatic women lucky enough to see their husbands back from war and men lucky enough to come home to a new radio. Sherlock Holmes clearly reflected some of the values and motifs of this “roaring” American era. In lieu of Holmes’ infamous addiction to cocaine, Barrymore played a romantic. With masses of young men returning from WWI, Holmes’ “uncharacteristic romantic interludes,” as one Internet Movie Database reviewer describes, could very well have had such an important role in the movie because he is representing these young soldiers (Internet Movie Database). Complementing this old-fashioned goodness, the fact that this film disregards Holmes’ cocaine addiction for a more romantic approach could be due to the fact that this movie was released shortly after prohibition set in.

Critics of this analytic viewpoint might protest that these values are not necessarily the values of America, but perhaps the actor playing the role, or the director telling him what to do. One such critic, writer for Turner Classic Movies online, Brett Woods, writes “There would have been a [cocaine] needle and there wouldn’t have been a honeymoon if Rex Ingram [popular director of the time] had filmed Sherlock Holmes” (Woods). In this opinion, Woods implies that the characterization of Holmes is such because director Albert Parker made it that way. While this may play a small part in each of the characterizations, I contend that further evidence will be too overwhelming to hold such a strong opinion.

In the next movie I examined, 1939’s The Hound of the Baskervilles, Basil Rathbone starred as Holmes. Rathbone, who has played Holmes more than any other actor—14 times—played a “clever and classy”, yet “playful” and “keen” Holmes. Dr. John Watson, Holmes’ right hand man, was characterized as a complete dunce (Hakari). In the late 1930’s, America was flirting with war in Europe. President Franklin D. Roosevelt had Hollywood executives shelling out propagandized movies to get Americans on board with military intervention. These characterizations could be subtle attempts to show a vital message (Snow 61). In one corner, Rathbone is portraying America. In the other, Nigel Bruce, who plays Watson, depicts Great Britain—a lesser hero, but still capable of helping America in its endeavors. More specifically, the characterization of Holmes as an intellectual, refined man in charge of every situation could easily be an attempt to portray President Roosevelt. Similarly, Holmes’ character was also described as stern and inquisitive (Hakari). To go along with this, it may be found interesting that in World War I, Rathbone served in the Liverpool Scottish 2nd Battalion as an intelligence officer, and even received a Military Cross for his courage (Internet Movie Database). This patriotism may have led to acceptance of such a propagandized role, if that in fact was the case, because the United Kingdom was a keen ally of the United States in both World Wars. 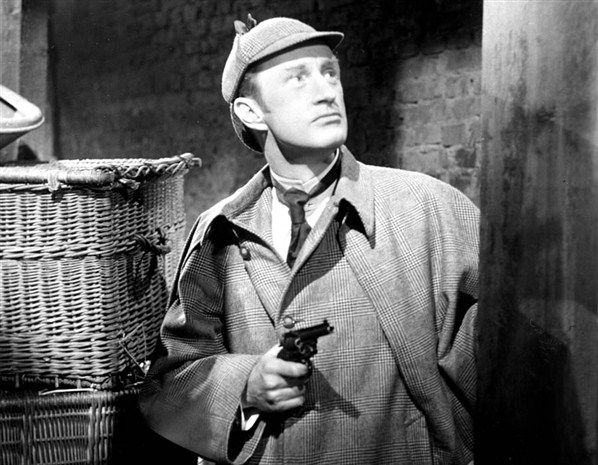 In 1954, a television series titled “Sherlock Holmes” appeared on NBC and ran only 39 episodes. Ronald Howard played Holmes, a “flighty, playful man possessed with an almost juvenile sense of humor” (Miller). The years following World War II, the so called “baby-boom era,” saw joyous Americans seeing their loved ones, and in the early 1950’s America’s economy started looking upward.
As a result, popular television shows, including “I Love Lucy,” “The Red Skelton Show” and “The Jack Benny Program,” were created to capitalize on America’s collective good mood (Screen Source). Along the same lines, “Sherlock Holmes” gave Americans a “lighthearted” series that starred the famous detective (Miller). For instance, in episode 38, Watson found a detached diamond tooth. After putting an ad in the lost and found section of the newspaper, he checks daily to see if anyone reports a missing incisor. After glancing at the newspaper for some time, Watson cleverly proclaims to Holmes “Everything’s lost in this lost and found!” (Internet Movie Database). Otherwise, Watson, so often a dunce, was a capable and smart sidekick in this series, interestingly the only Holmes television series ever produced in America (Internet Movie Database). In essence, in this time when America’s sense of humor allowed for a lighthearted series, “Sherlock Holmes” delivered.

In 1975, an “entirely new Sherlock Holmes” was introduced in The Seven-Per-Cent Solution (Canby). In this film, produced in both America andBritain, Watson tricks a drugged-out Holmes into meeting psychoanalyst Sigmund Freud. Holmes has reached rock bottom. He has not had a case in months, he has lost much of his deduction skill, and he irrationally worries about his arch-nemesis, Professor Moriarty (Valentin, Kehr). Both the United Kingdom and United States began the 1970’s with an economy familiar to much of us today. In Britain, spending was cut significantly to conserve money (Watt). In America, it was a “decade of pessimism.” Their unemployment hovered around the same level that we see today and they too were in a recession (Schwenk). Recently, an American comic book has appeared titled “The Adventures of Unemployed Man” (“Adventures”). In this same manner, The Seven-Per-Cent Solution showed a Sherlock Holmes with no workload, so Americans and Brits could see that they were not alone. Also around this same time, the Soviet Union continued their unruliness with the allies during the Cold War. Holmes, in the movie, had a constant worry of his enemy Moriarty. This could be a direct connection to the real world, where many Americans were worried about the threat of the Cold War turning into a “total war.” Going along with this same theme, Holmes engages in an uncharacteristic sword fight, which could represent the battle between America/Britain and the USSR.

From Sherlock Holmes to Sherlock Holmes, 2009 brought us our last notable Holmes film. Prominently different than past portrayals, Robert Downey Jr. plays a “tough, sarcastic,” “rascally,” “awesomely sexy,” “wayward,” “charismatic” action star in this new film (Pais, Rodriguez, Shoji, Tse, Wilhelm). This film, directed by Guy Ritchie, is clearly aiming at teens and young adults, with fast, action-packed scenes. In America, Generation Y—or those of us born between 1982 and 2002—have often been described as “high performance and high maintenance” and “cynical” (Williams). While Downey Jr. was not born during this range, his acting style in this movie clearly panders to it. Movie critics have observed that Downey Jr. transformed Holmes into a “master of fisticuffs” and more than one critic, including Roger Ebert, likened Holmes and Watson to Batman and Robin (Wilhelm, Ebert). Converting Sherlock Holmes into a character that is more likely to use his fists than his magnifying glass is the best way for Ritchie to draw the broadest audience. In America, teens dig this stuff. However, other countries also loved the movie. For example, the aforementioned quote calling Holmes “awesomely sexy” came from a Japanese newspaper, and a quote calling him “superhero-like” came from China. In addition, the journal that claimed Downey Jr.’s Holmes was a “master of fisticuffs” came from South Africa. All around the world, this characterization of a tough, sexy Holmes grabs our attention and never lets it go. The analysis of this film, while perhaps the simplest, is also arguably the most widespread, blatant, and effective. For almost 90 years, Sherlock Holmes has been America’s favorite “classy, flawed, romantic, fun, sexy” detective. Often, the man Holmes becomes in each particular film reflects the happenings of the country and world around him.
Without these changes, ranging from moderate to severe, these films would perhaps not draw the same audiences that they do. The films’ popularity depends on how effective the director and actors are in portraying American culture. Naysayers often disagree with sociocultural analyses, claiming that characters play their parts regardless of what culture is like, and any connections are pure coincidence. I, on the other hand, believe that everything in film is there for a reason. We just have to find the reason.

The Adventures of Unemployed Man. 25 February 2011.

One thought on “The Transformation of “The Original Caped Crusader””