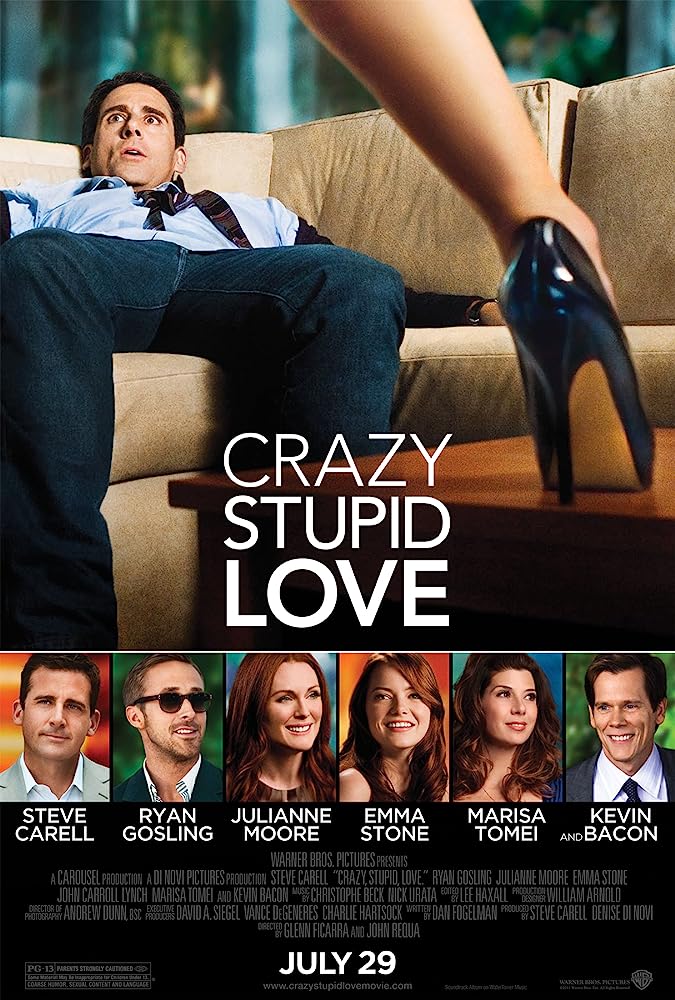 With movies like 30 Minutes or Less, Fright Night, and One Day also in theaters, one ponders why anyone would need more crazy, stupid, or love at the movies this week. Regardless, directors Glenn Ficarra and John Requa (who also tag-teamed on the flop I Love You Philip Morris) brought us Crazy, Stupid, Love, the newest comedy from Steve Carell and Ryan Gosling.

The story is complicated, unfinished, and sad. We blend the lives of Cal (Carell) and his wife Emily (Julianne Moore), with Jacob (Gosling) and Hannah (Emma Stone, fabulous as usual). Cal and Emily are getting a divorce after Emily has an affair with a coworker (Kevin Bacon). Jacob, a lady’s man, finally meets the girl that will let him settle down, Hannah. Little does either of them know about the other’s real story. What results is a mess of an ending—one that I wouldn’t dare ruin. Sparsely mixed in the storyline are a few other love threads, threads that didn’t seem to be tied up before the movie was released (think The Hangover Part II). The idea is cute, but the execution is where the flaws reveal themselves.

Critics and fans flocked to see the dapper Gosling in his most-watched role since The Notebook (actually, CSL made approximately $3 million more on opening weekend). However, to me it seemed as though the movie was just an excuse for the stylish star to try on a lot of new clothes. The scene where he shows off his abs is another example of how easy it is to get teenage girls to flock to movie theaters, but I digress. Emma Stone is masterful; especially considering this was her less-watched movie in the same week! Her other, The Help, made $7 million more opening weekend, but that’s another film for another review.

The positives? Besides Stone, Marisa Tomei is brilliant as one of Cal’s rebound girls. Jonah Bobo, who plays Carell’s son, is another bright spot. The 14-year-old actor is wonderful and is sure to have a bright future in the business. Or you could always just go to see Ryan Gosling’s stomach, but I would suggest a younger Gosling (say, Remember the Titans?) if that’s what you want.

4 thoughts on “‘Crazy, Stupid, Love’ gets one of the three right”